The coolant pump is located next to the left hand headlight pod (when sat in the car). It is a little electric pump with two wires and two hoses attached.

The electric pump operates when the engine temp is very high, but the engine is turned off. The fans and pump use the same switch (next to the thermostat).

To test the pump:

The pump has its own fuse, so if the fans operate but the pump does not, check the fuse first! It's located under the dash-cover (remove the two screws and lift off). It is fuse #4 in Fuse Box C.

Although this theory has not been tested, it is based on a posts on a few websites where people have reported freeing them using coolant flushing compounds:

The coolant pump is likely to be turned on relatively infrequently (if at all in colder climates) unless the engine is worked hard and stopped shortly afterwards (as may occur on track). The only time the pump is necessary is if the engine stops with a high coolant temperature (just before the fans kick in) although it is possible that heat soak may also elevate the under bonnet temperature. If a car does not exercise the pump then it is possible that the pump becomes gunked up (for want of a better expression). So, the only time most people need ther pump, it is likely that it will not work!

Unlike a direct coupled pump, this motor is magnetically linked to the impeller so once the motor starts spinning, there is very little torque applied to free a stuck impeller. In this instance, a flushing compound or de-scaling liquid may help release a sticking pump. I think the best option would be to incorporate a run-on timer to run the pump for a short period every time the engine stops.

It looks like this type of pump was designed for water cooled intercoolers and similar applications. 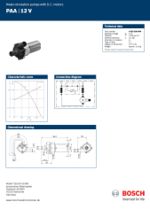 During my research, Ashaman found a site which showed a very similar pump. It had been used in the past to replace a Mercedes coolant pump, which is very similar to the Lotus pump.

This pump is 12 volt and features a magnetic drive - this means that there is no way for water to ever get into the electrics. It also means that if a foreign body got into the impeller and jammed it, the motor should not burn out.

I purchased my pump in the UK from Southern Marine Supplies.

When the pump arrived it turned out to be EXACTLY the same shape and size as the original. Even the wire colouring is the same. Only difference seems to be that they recommend a 2.5amp fuse rather than the 5amp recommended for the original pump. 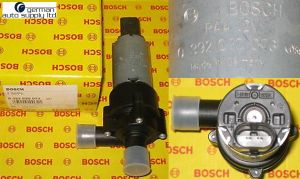