From WikiLEC
(Redirected from Wastegate: Releasing)
Jump to: navigation, search

If the turbo is on the car, then you might find it helpful to remove the top turbo heatshield, but this is not absolutely necessary.

First job is to remove the pressure actuation pipe (blue arrow below). Release the hose clip and slide off; if it is tight then place a large folded rag on the bodywork and lever off with a long screwdriver. 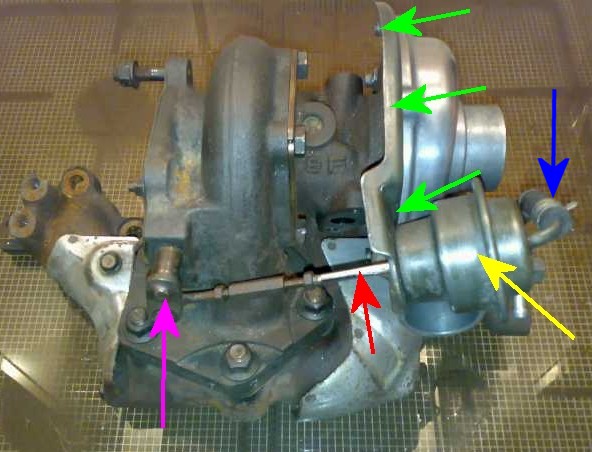 Removal the 3 bolts (green arrows) that secure the diaphragm bracket to the turbo impeller housing (the shiny aluminium bit). 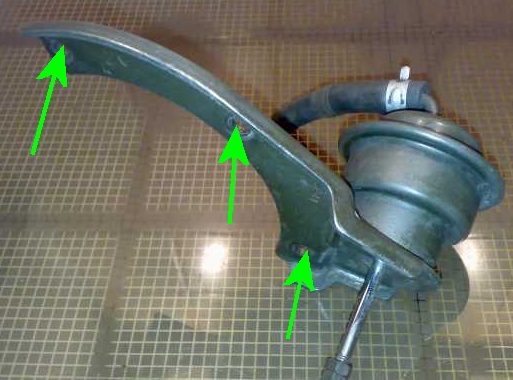 Ideally, remove the circlip from the bottom of the peg at the end of the actuation shaft which allows all the corrosion for be brushed off with a wire brush the reattach to the wastegate arm with plenty of Capaslip or similar and replace the circlip

This then allows you to move the whole diaphragm and rod from side to side (Wiki Wastegate Wiggle), which soon has it running silky smooth. Make sure the wastegate shaft is turned over it's full range (approximately 90°) as there is often evidence of sticking at the extremes of travel. 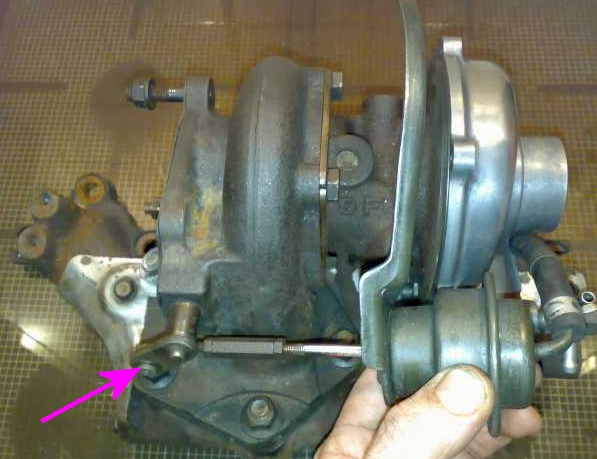 There is not a consensus on whether to lubricate the wastegate shaft or not. One strong argument against is that, because of the extreme temperatures involved, most lubricants will degrade rapidly which may cause the wastegate to stick again and may even carbonise which can cause excessive wear. Any expert opinions would be gratefully received. [In the absence of expert opinion you'll have to make do with mine for the time being: CopaSlip type of lubricant is rated to 1100°C which should be adequate - Geoff]

All that remains is to replace the three bolts and the pipe; the usual problem is getting the thread on the bottom bolt (nearest the wastegate actuator rod) started. Ideally you need to curl your arm right underneath by snaking it down past the water pump. Failing this, due to fingers like pigs' tits, a 12 year old is ideal for replacing this last bolt. 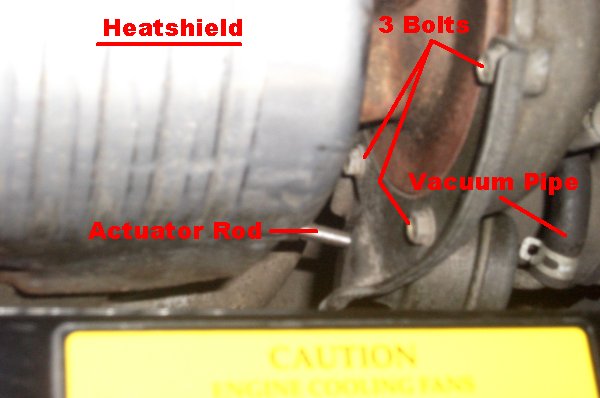