The electrical switches used in the Elan come from Vauxhall (UK GM) cars of the same era. Carltons, Astras and others can provide useful switches for the front panel to the window and door mirror switches.

In the UK, as well as scrapyards, there are several suppliers of new and old Vauxhall parts. Vauxhall Car Parts are a good source of new switches.

One difference is that the Elan switches have orangey-red markings whereas the GM switches are white. The best number to check is the SWF number which appears to be unique to the switch, whereas there are often multiple GM numbers for the same switch: 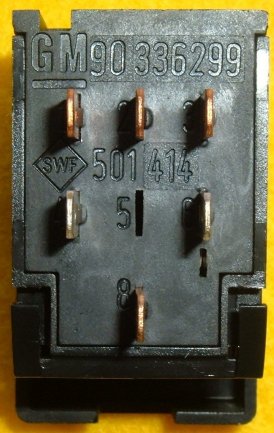 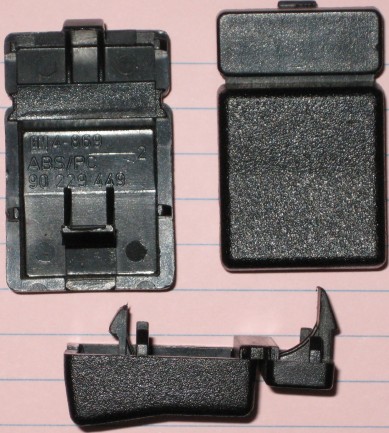 GM 90336301 / SWF 501410 for the front foglight Note: Momentary action, so needs latch (it is possible it is internal to the switch) or may be used to trigger e.g. fan timer circuits

Although some switches may have shorter knobs, but these can be swapped quite easily. One way of making a white logo match the rest of the switches is to use a red CD pen as in the heated rear windscreen switch on the left of this picture (however after some use, the red wears off and the best solution is to affix some transparent red plastic sheet): 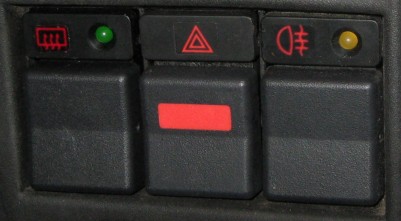 If the backlight illumination lamp or LED fail (or you want to change the colour of the LED) you will have to remove the switch as they are both soldered in. The lamp cover at the top of the switch can conveniently be pulled off providing purchase for a pair of small pliers at the position marked with the red arrow in the left hand picture. There is a retaining latch at the bottom of the switch and the easiest way of releasing this is to push a key or similar almost vertically up through the cutout in the bottom of the switch. This is shown side on in the right hand picture below for clarity: the key enters via the cutout (red arrow) and pushes up the retaining cantilever (blue arrow) thereby releasing the retaining latch (green arrow). The switch should pull out but if it does not, the switch panel may have to be released and the switch pushed from behind. The best tool I have found for doing this is an Allen key which can release the latch and pull the switch at the same time. 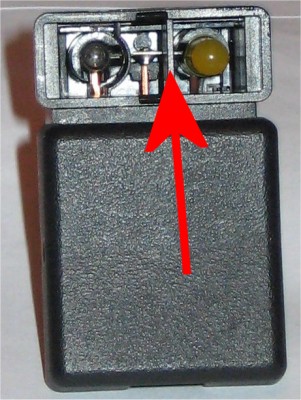 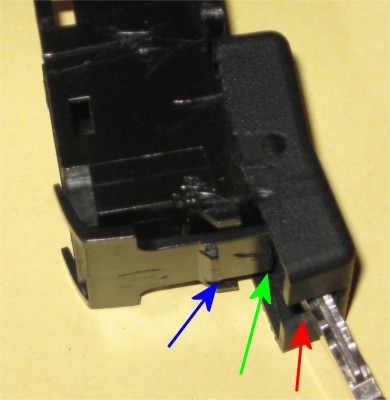 With the switch removed, the first job is to open it up. It is held together by four retaining latches marked by red arrows in the left hand picture. An easy method is to insert two thin bladed knives at the positions shown by the green arrows to open up the switch body then to insert a third knife or small screwdriver at the position shown by the blue arrow and to use the latter as a lever to get the switch apart. The three knives are shown in action in the right hand picture: 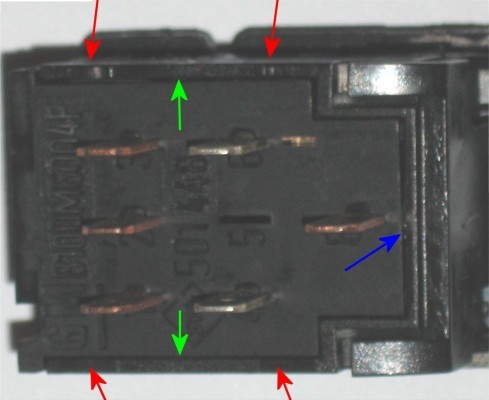 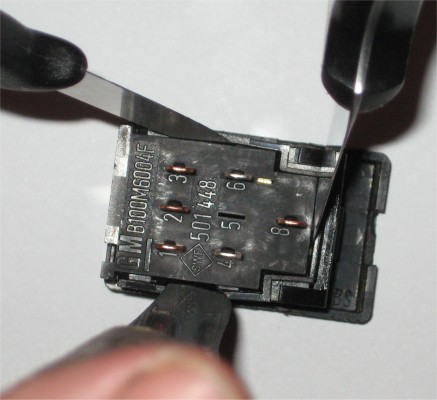 The body of the switch should pop apart and open up to reveal the lamp and LED. In this rear foglight switch, the cathode (marked by a flat on the LED body) is connected to the centre contact (pin 2) and the anode to the right hand centre contact (pin 4).

NOTE: this switch has a Lotus part marking B100M6004F and does not have a 2kohm resistor {red-black-black-brown-brown} between the anode and pin 4. These resistors are shown in the Rear foglight circuit diagram and are present in the equivalent GM switches. This is slightly worrying as there would not appear to be a suitable place for including the resistor in the wiring harness. If you use a switch that has an integral resistor, it may mean that the LED does not illuminate very well but will not affect operation or safety.

In the middle picture, the lamp and LED have both been changed. The LED is a standard 5mm diameter LED, however the original illumination lamps are about 10mm x 4mm diameter with long pigtails. As I have not been able to find a suitable source, I have adapted a 1.2W Type 286 capless lamp; these are 17mm x 5mm diameter so some modification to the switch body is necessary or the lamp sits too proud - as highlighted by the blue arrow in the middle picture. In the right hand picture, some of the plastic lamp support at the bottom of the lamp recess has been removed with a soldering iron (red arrow) which allows the lamp (blue arrow) to sit lower than the LED (green arrow). 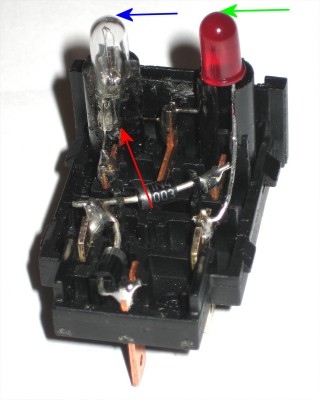 The type 286 lamp (also used for dial illumination) is show together with the LED in the left hand picture and the re-assembled switch in the right hand picture. Note the carefully crafted cutaway section (green arrow) fashioned by Gerry (gee0) to allow us to see the exact position of the new lamp in relation to the switch cover (red arrow). :-D 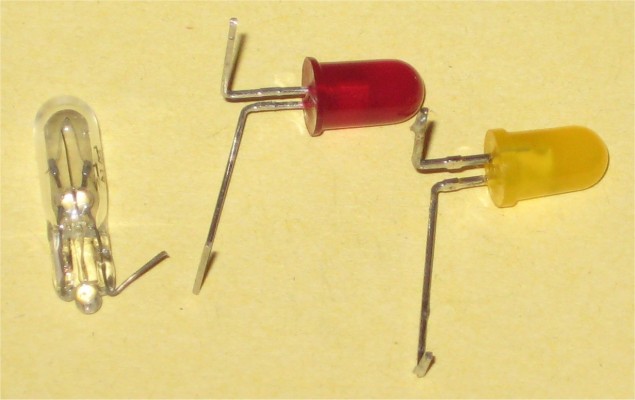 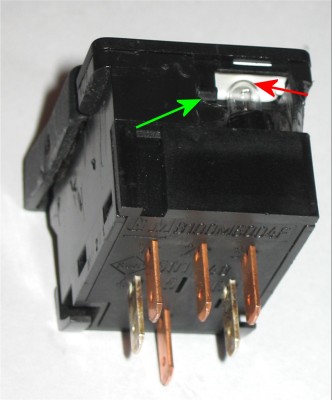 Of course, incandescent lamps are very passée these days, especially considering their deterioration in light output with age and delicate construction. Should one prefer not to have a red background illumination, then starting with the white GM switches, any colour is possible if the lamp is replaced by an LED and series resistor(s). Here is the construction of a white backlight (using a Multicomp OVL-3321 3mm mega bright white LED from Farnell and two 220ohm 1/8Watt resistors from Farnell). After soldering, some additional mechanical strength was added with TakPak (or epoxy resin) and heatshrink. Make sure you get the polarity of the LED correct! 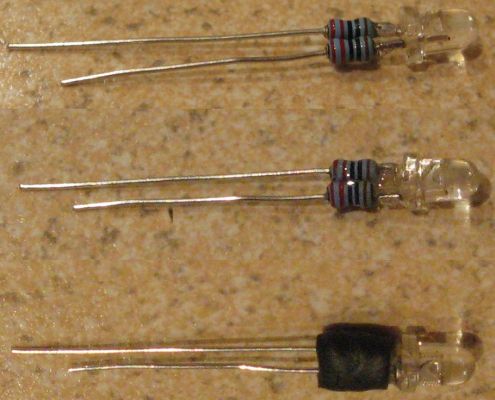 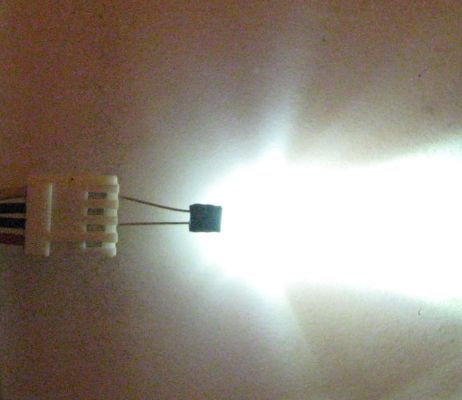 The LEDs are available in a range of colours including green. 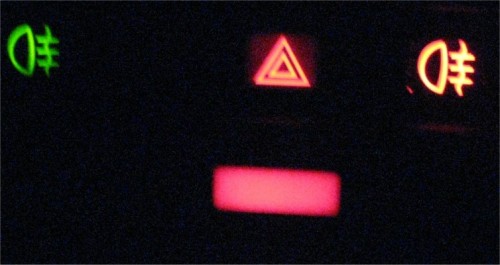 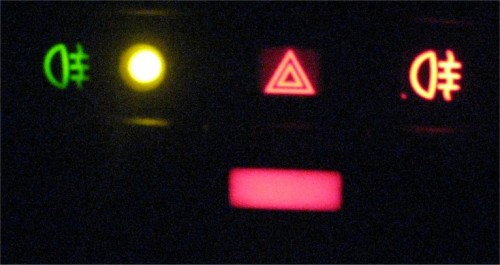 It is possible to repair the window switches: Some tweezers pressed down the side of the knob will open up the body sufficiently to allow you to lever out the knob. There is an LED soldered into the top of the switch body which must be removed before prising off the back of the body. All that was wrong with mine was that the spring contacts of the switch had come off the retaining bracket. While putting it back together, I took the opportunity of replacing the yellow LED with a red LED (see below left). The LED is a standard 3mm diameter one (there is a dropper resistor integral with the switch) but make sure you get the polarity correct. These LEDs are available from any good electronic component supplier e.g. Maplin. 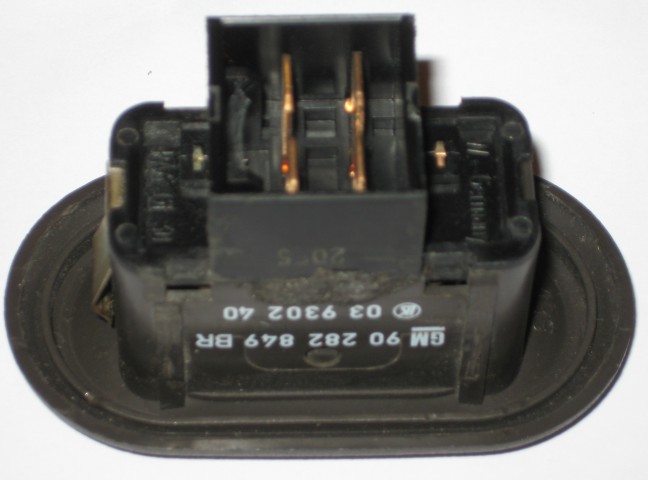 The Opel part number is 1241069 for the black surround. Available from http://www.opel-classicparts.de/ in Germany

Source is the Vauxhall Frontera 1991-1998 and comes with the heated mirror switch and yellow LED and probably has the correct plug. 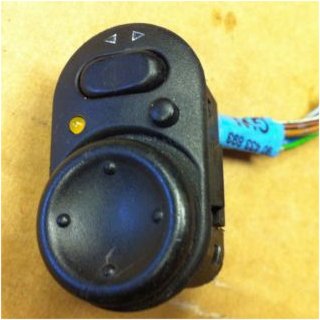 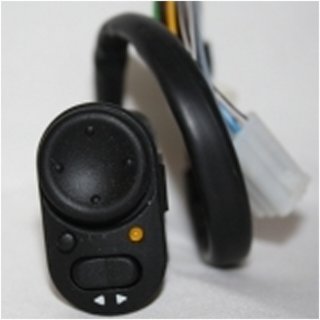 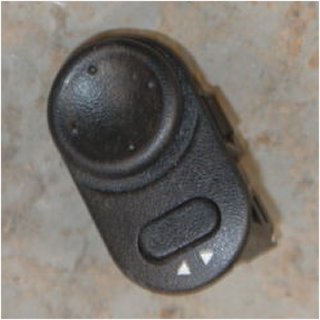 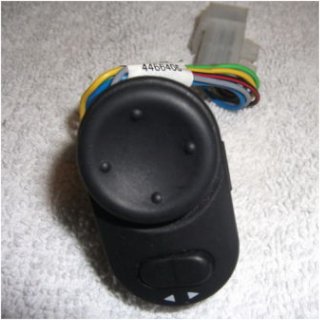