This is part of Candles' write-up on renewing the Starter Motor Contacts.

Prior to following the workshop manual, the first thing to do is get the car up on something. The wheels need not be free but it helps for the driveshafts to be more out of the way. The higher the better (to a point!) as your arms will be straighter hence making it easier to reach in to the constricted area.

Then, to provide access to the rear of the engine, the crossmember under the engine has to be removed; That is this thing, when viewed from the top: 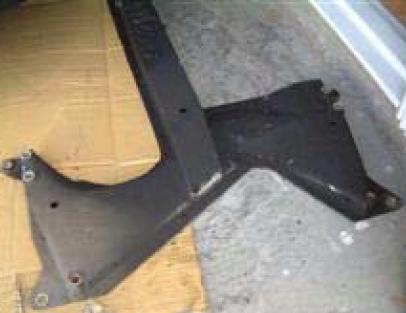 Arm yourself with a 19mm socket on a big handle, a 19mm ring spanner and a 8mm socket and ratchet handle. Start at the radiator end and disconnect the LH fan and free the wire from the clip.

Then undo the 3 setscrews that hold the front of the crossmember in place. Noting the placement of the spacing washers, remove the engine damper.

Withdraw the crossmember from under the car.

Now undo the exhaust from the bottom of the downpipe and loosen the flexible joint. Remove the oil filter to improve access.

Disconnect the solenoid leads by pressing the side of the weatherproof connector and pulling out then disconnect the power supply leads from the terminal (middle right of motor body).

Now here comes the hard bit. In the manual it simply states; "Remove the two mounting bolts." Ha ha! This took me hours!

This is the view of my Elan's filthy underside looking straight up. The front of the car is the bottom of the picture and the exhaust is the pipe on the right. I have scribbled a red line roughly where the body of the motor is when installed.

The lower bolt is no problem to get to but the upper bolt is above and behind the motor, out of sight.

I tried a socket but although I could get it onto the bolt, I couldn't get an extension in behind the motor to turn it due to the oil pressure transducer (black rubbery thing) being in the way.

I managed to turn the bolt using a 14mm ring spanner, but less than 1 flat, so I couldn't reposition it to turn the bolt anymore. I ended up buying a 14mm ratchet-ring spanner from Halfords and using that, initially intact. I was moving it 1 click (~5 degrees!) each time due to the restricted access, so after much swearing, I butchered the spanner to this:

I repositioned it and it worked like a dream. I took the motor out and withdrew it from behind the engine.

This is the bit where you need to just push the exhaust slightly out of the way. If anyone has to do this job, you will save hours by having a spanner like this.

Refitting the motor was easy.

I located the top mounting bolt by hand then tightened with the ratchet ring-spanner.

I torqued the bottom one up properly and then felt the torque with the ratchet spanner to get an approximate tightness for the top one as there was no way of getting the torque wrench in there.

Reassembling the rest was literally the reverse of removal, with a bit of threadlock and a slight cleanup for the various chassis crossmember bolts.

When I got around to fixing the old motor, I first took off the end cover by removing the three screws marked with an X: 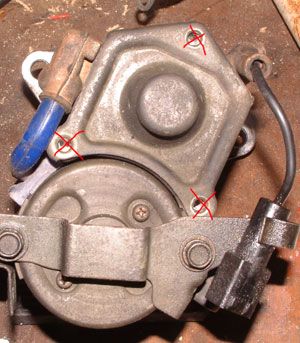 Underneath was revealed the solenoid plunger and contactor mechanism: 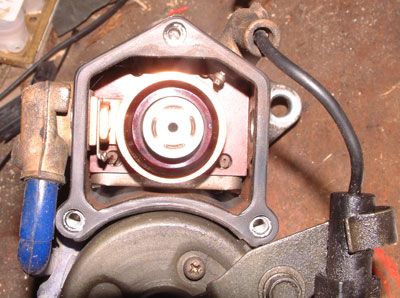 On the left and right are the output to the motor (blue) and input (removed) respectively. The black wire is the signal from the keyswitch to fire the solenoid.

I then obtained shiny new ones from a local starter and alternator specialist (name and address available if required). He mentioned that the unit is very common to many applications and had the contacts 'on the shelf.' Make: NipponDenso Motor model: 8944410871 Serial: 128000-4571. 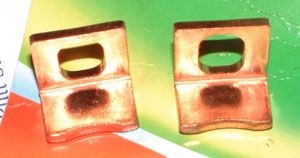 I fitted the new contacts and cleaned up the central copper contact ring on the solenoid armature. On reassembly and test it worked perfectly.

The kit was also sourced from NipponNev on eBay aka www.nipponautoparts.com reference Toyota ... DENSO Starter Contact KIT for ~7GBP in 2007. Additional information is on NipponNev's Website