As promised, I’ve done a bit of a write-up on fitting seat heaters to the Honda S2000 seats – it’s a fairly simple, but a bit fiddly process, and like with any such enterprise, I’m sure there are more than one way to do the job, but this worked for me.

Only basic tools are needed:-

And if you want/need to add extra padding/support to the seat side bolsters, then you may need a bit of foam rubber, closed-cell foam sheet and spray adhesive.

Each seat is originally held together with metal hog rings, but unless you are confident/competent with the necessary tools and consumables, it is far easier to use plastic cable ties to re-assemble them – I used 4.8mm x 295mm as I found the longer they are, the easier some applications are – but shorter ones will work just as well (as they only actually need to be 30mm or so, but will give you less working room!)

You will need 25 for each seat base and 10 for each seat back (assuming that you don’t need to replace any extra bits of the cover – I did, but only because I needed to do a slight repair to a worn back bolster.

If you’re good at maths, you’ll have worked out that you’ll need 70 cable ties (£1 for a hundred from my local sell-everything shop!)

There are many different seat heaters for sale, but they all work/fit in a similar way – basically, just a fibre pad with elements glued into them.

The whole loom is plug-and-play – just fit the 4 pads in the seat bases/backs, plug them into the wiring loom, fit loom into car – job done! The loom only has 4 wires which need connecting into the car loom – permanent live, fused live (via ignition), and 2 earth connections. It is fused and relay operated (all fitted to the loom already), and there is enough length to the wires to enable you to fit the switch wherever you want (within reason) – I haven’t actually fitted it yet, but intend to fit the switch in the centre console, near to the mirror switch (but it can go in a spare position in the dash if you have one (or wish to fit it there).

Okay, so I have only shown one seat (left side) being worked on, but the other one is a mirror image!

To dismantle the seat, you need to realise that the seat runners are different each side, only one actually removes from the seat, the other (containing the reclining mechanism) is part of the seat back, and whilst it unbolts from the base, there is no need to try and remove it from the seat back (if you can get it apart, good luck in trying to replace it!!)

Undo these 3 fittings, and the seat runner will come away – the other side just needs the 14mm bolt and 12mm nut removing. 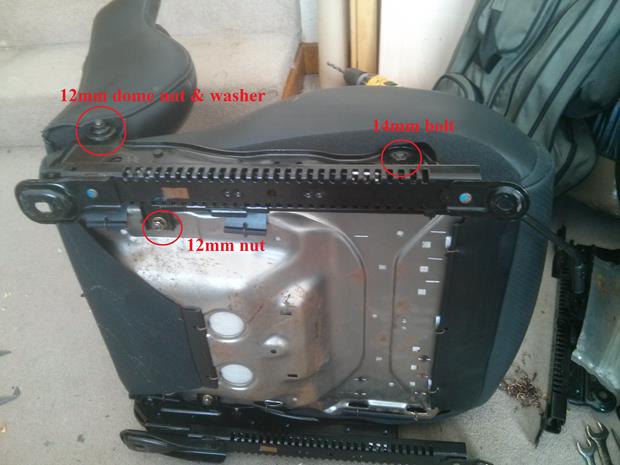 You’ll now have 3 bits:- base, back and runner/bracket. 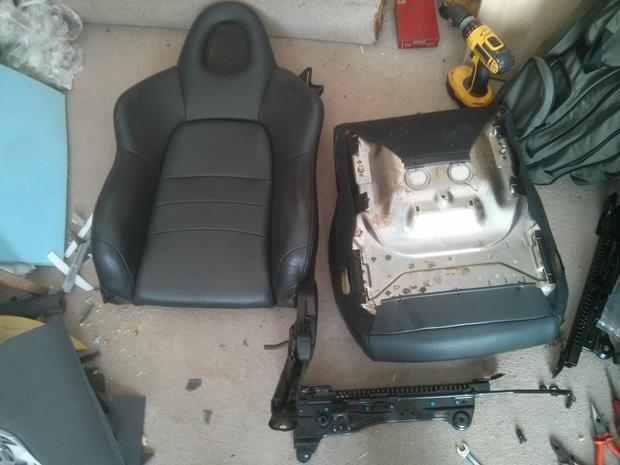 The base is made up from 3 basic bits, the metal ‘tray’, the foam padding, and the leather/vinyl cover. Firstly, remove the 13 metal hog rings which attatch the cover to the metal tray. 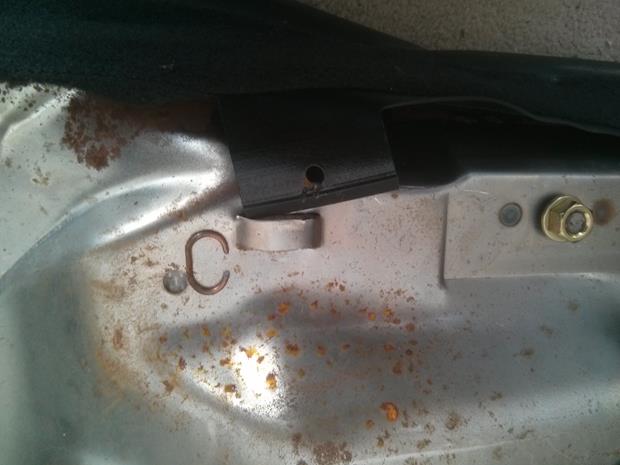 Then you can lift the cover/foam away from the tray.

The cover is attached by 12 hog rings to wire fittings built in to the foam – they need to be carefully removed to avoid tearing the material, and to avoid pulling the wires out of the foam. 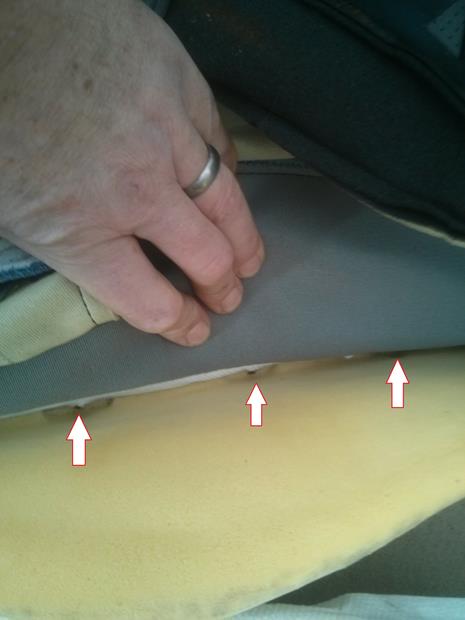 Then you’re left with these bits. 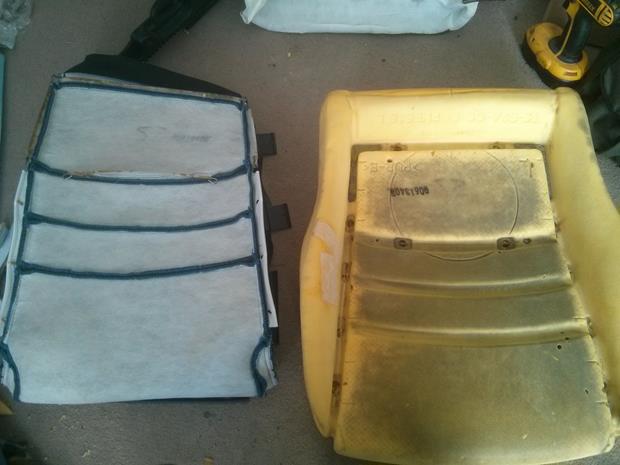 If your foam is in good nick, you can ignore the next few pictures, but you’ll probably find that (depending on their age/use) the seats could do with a bit more support – if they aren’t damaged, then simply cut a 10mm wide channel along the length of the bolster to insert some extra support. 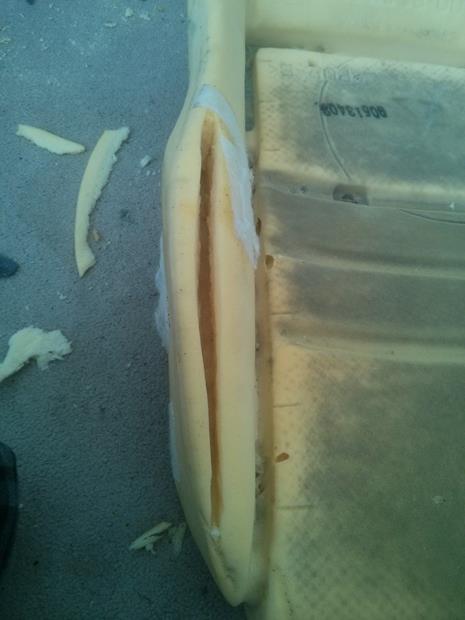 But chances are that the foam will have disintegrated a bit around the outer bolster (as that’s where all the pressure goes when you get in and out of the car) – and it may have come away from the base material near where the metal bar part of the tray fits. 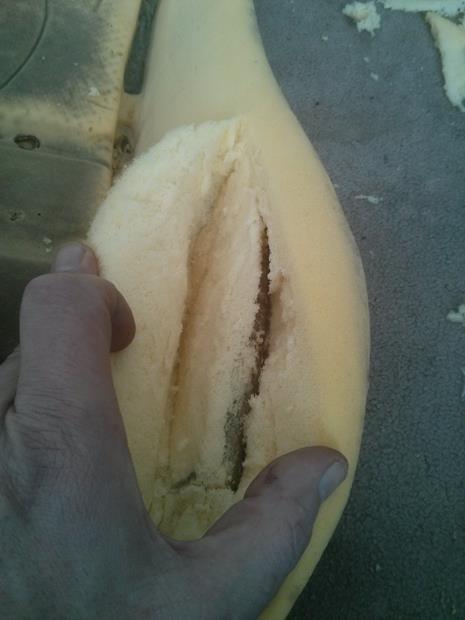 Trim all of the ‘powdered’ foam away from any damaged areas – cut it back to sound foam. 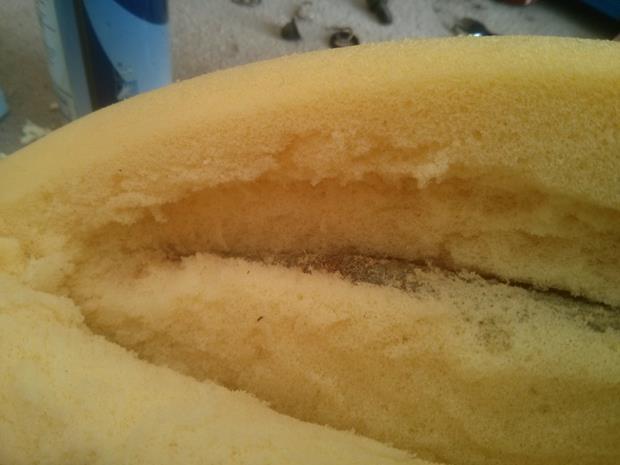 Use spray adhesive to stick new foam into any hollowed out bits – leaving a 10mm channel for the extra support bits. 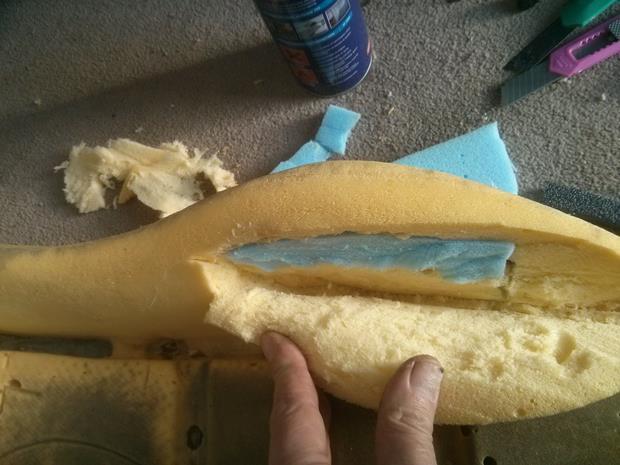 Use 10mm thick closed-cell foam sheet to fill the channel – held in with spray adhesive – leave it sticking out a bit proud until the glue sets. 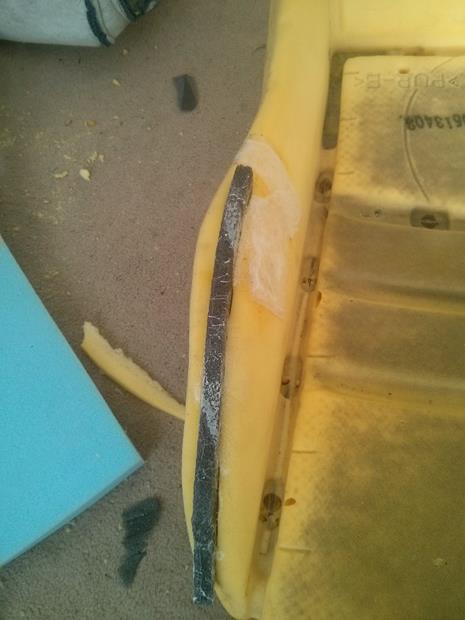 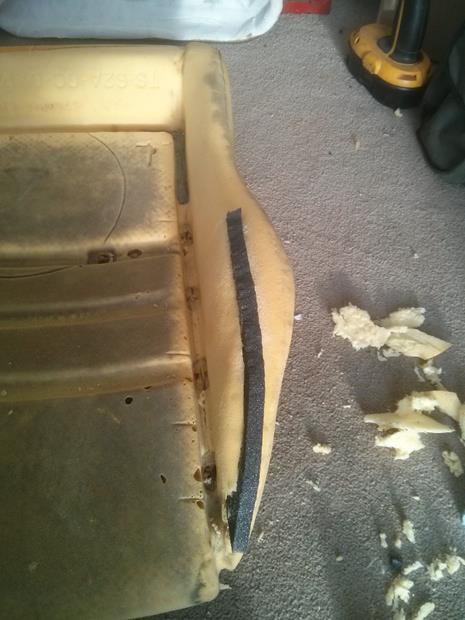 Once the glue has set, trim it to the original seat profile with a sharp knife 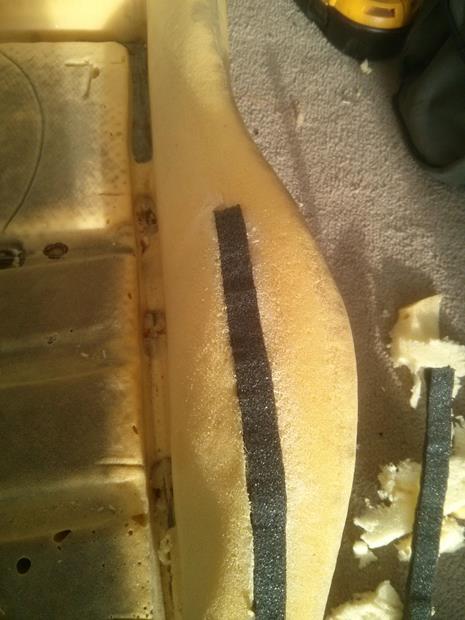 A piece of 2mm foam sheet glued over the top of the bolster tidies it up a bit, but probably isn’t necessary (it does help to ‘fill out’ the leather cover though!) 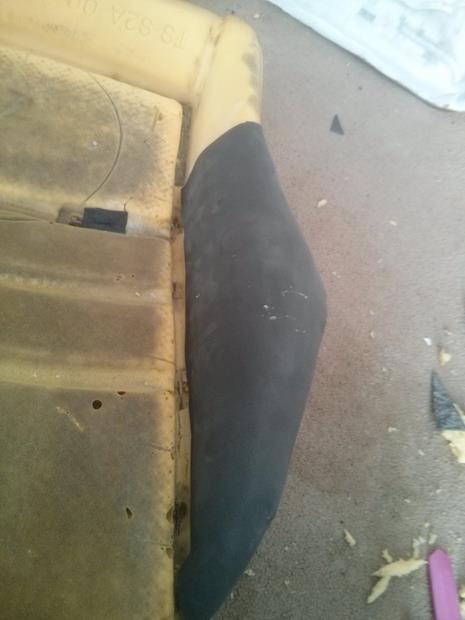 Okay, back to the heater fitting – you will notice that the actual pad is made up of 3 separate heater elements – you need to cut a couple of small slots out of the unheated bit to line up with the 2 wire fittings in the foam (where the hog rings came out). 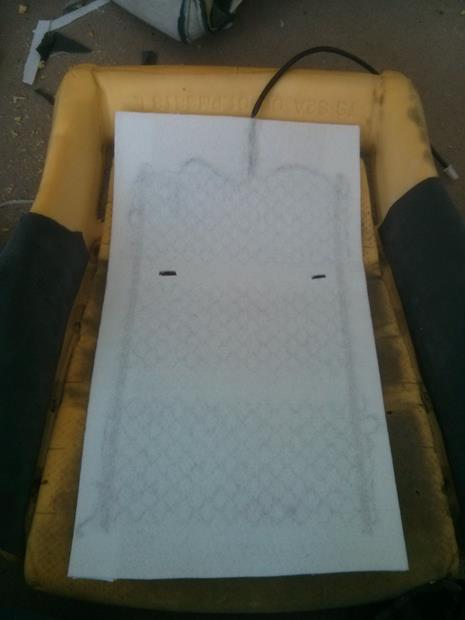 Make a hole through the back of the foam base where the wires will pass through – then temporarily replace the foam onto the tray and mark a corresponding hole. Remove the foam and drill a slot through the tray for the wire. 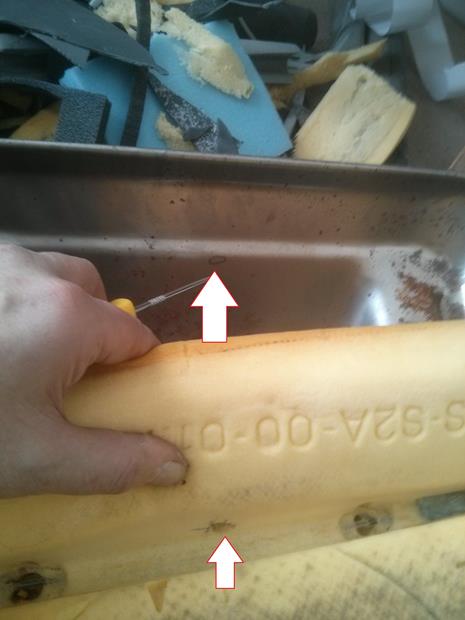 It should all line up nicely – if so, we can move on to fitting the heater pad… 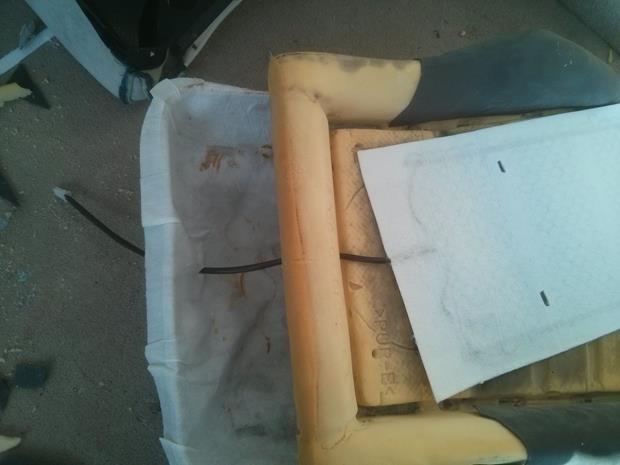 Firstly, fit a couple of cable ties to the foam (note which way round I’ve done them – feed under from the front of the seat – it will probably work the other way round, but having tried it both ways, this worked best for me) 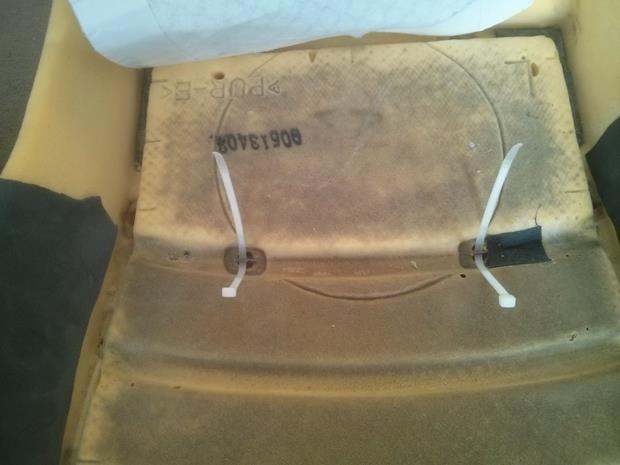 Feed the cable ties through the holes you made in the heater pad, then remove the backing from the self-adhesive strips along the pad edges and stick it to the foam. 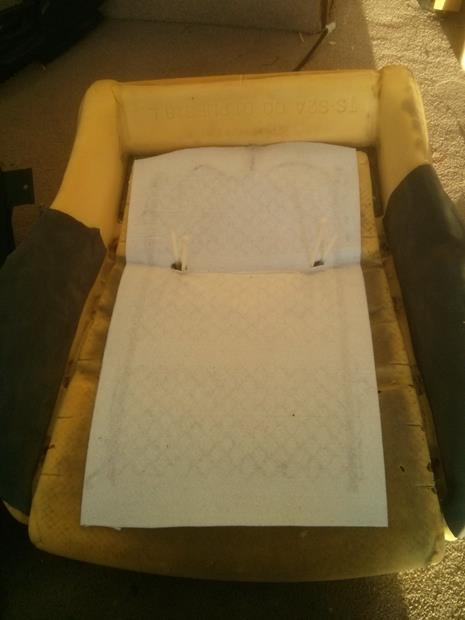 Fit the rest of the cable ties around the outer edge of the seat – this is the fiddly bit! – easiest to slip them through the wire in the foam, and pull through with long-nose pliers or tweezers. Don’t pull any of them tight yet!!!! (this is where you’ll realise that the longer cable ties were a good idea)

With the 12 cable ties loosely fitted, it should look something like this (viewed from the front of the seat). Reach in from this direction and tighten up the 2 cable ties which pass through the heater – the excess plastic will be facing you, and can be easily trimmed. 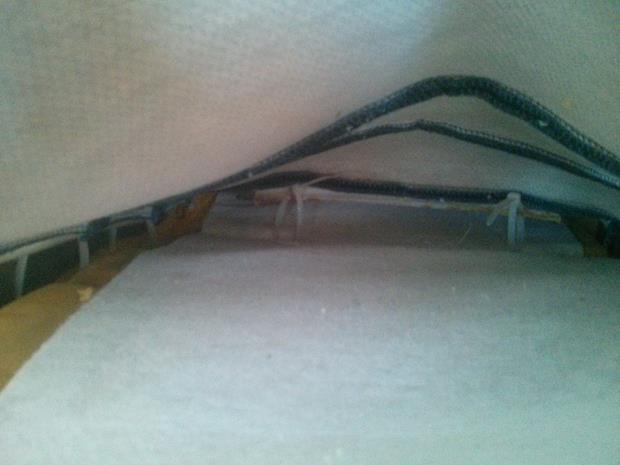 It should look a bit like this – the rest of the cable ties are easily reached from the outside, and can be tightened up and trimmed. 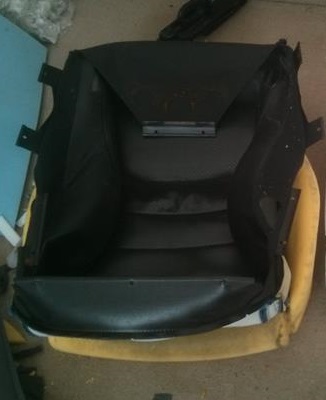 Then carefully pull the leather over the foam (which is back in the tray by now!)- manoeuvring the foam to properly fill the bolster cover…. It may still look a bit baggy, but it will tighten up.

From underneath, fit the 13 cable ties loosely (leave the 2 rear ones until you have routed the wire towards the edge which will be the centre of the car) 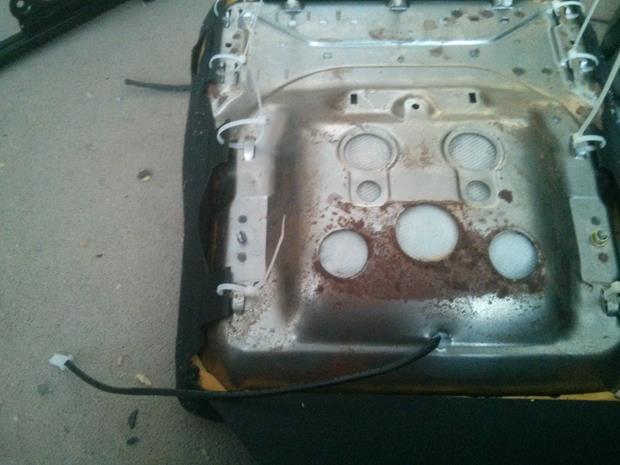 Pull the cable ties to tension/fit the seat cover. 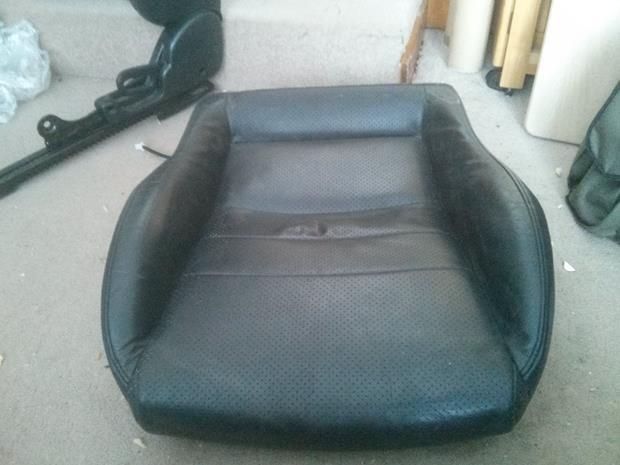 The seat back is actually a lot easier to do than the base – there is a plastic ‘U’ shaped channel which runs along the width of the seat to fasten the cover to itself (you’ll know what I mean when you see it!). 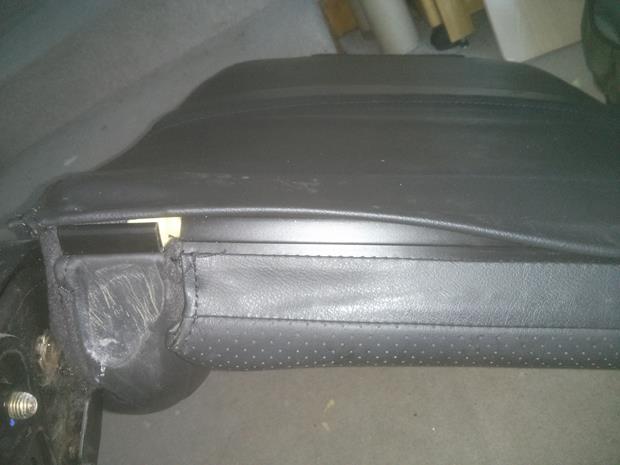 Once the cover is separated, the centre ‘cushion’ simply lifts up, leaving the bolsters alone – the leather is attached (hinged?) at the top, so don’t pull it away!

There are 4 hog rings each side…. 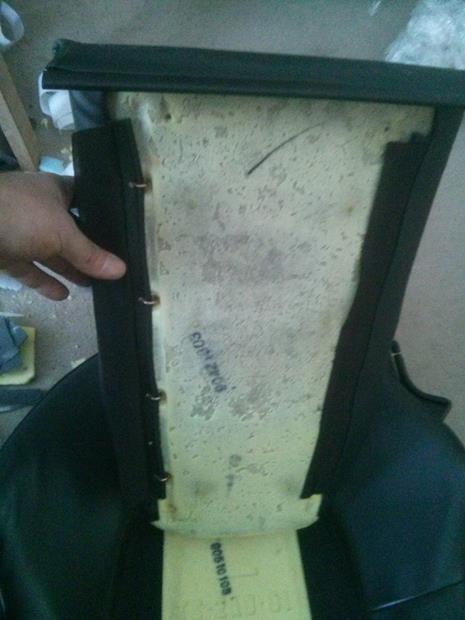 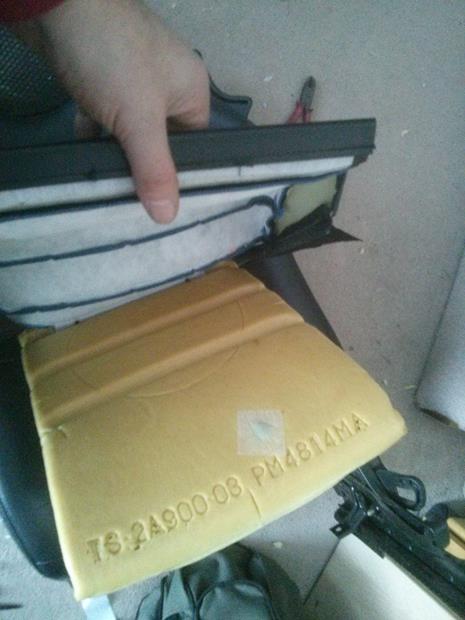 Then the foam simply lifts away. 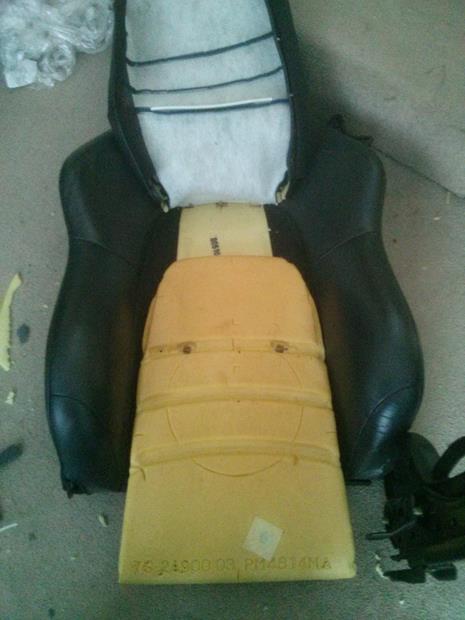 The heater pad is fitted the same way as the seat base – (you may need to trim an inch off the top – but don’t cut into the carbon fibre heating element.) 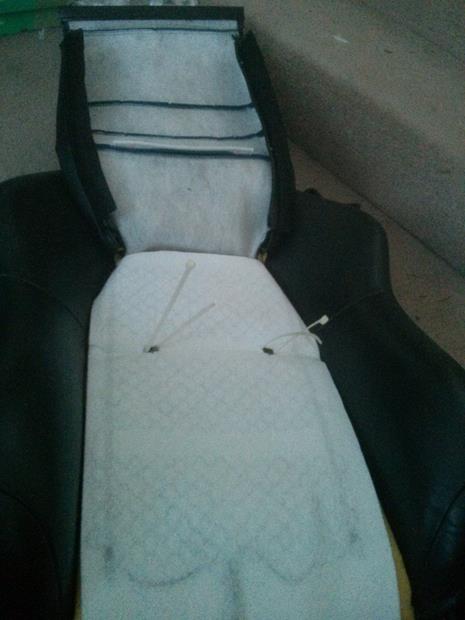 Feed the cable ties from the centre towards the edges…. 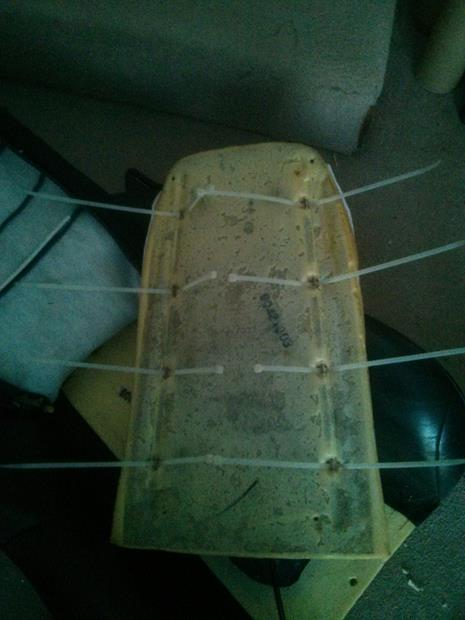 Again, tighten up the 2 which pass through the heater pad first, then the outer 8.

If you feed them through in the direction I did, then you can easily trim them, and carefully spin the plastic ‘loops’ round so that the lumpy bit sits in the hollowed out bits of the foam. 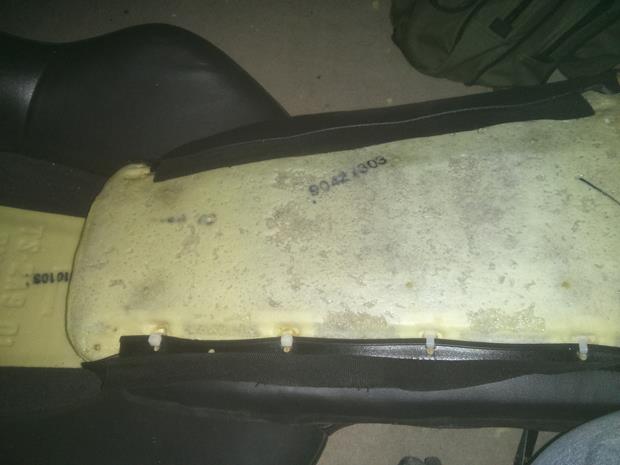 Run the wire out at the side before looping the plastic back into the ‘U’ channel to join the front and back leather cover. 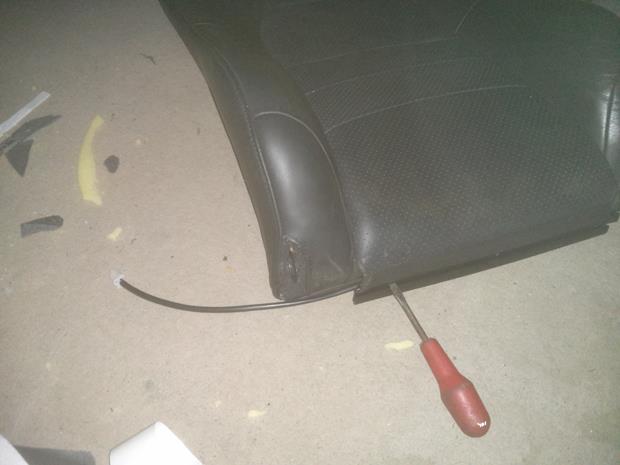 That’s it – job done – I haven’t taken pictures of putting the seat back and base together – you should be able to do that bit (as Haynes manual would say “Refitting is the reverse of removal”).