On Motorway driving at night I had noticed my headlights flickering on roadsigns as I passed. They also looked like they were rather high and could be blinding other drivers.

I decided to investigate further and discovered I could lift the head lamp pods up and down 10mm or more.

I discovered that there are effectively 8 ball joints in the headlamp mechanism. At least some of them were very loose.

I repaired the problem as follows :-

1. Open the bonnet and locate the headlamp motor. 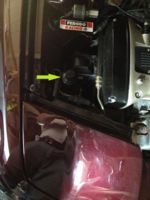 2. Turn the knob by hand to lift the pod manually 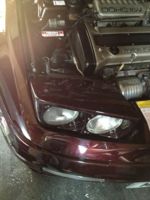 3. Remove the 6 screws holding the two headlights in place. Turning any of the others will upset your headlight alignment. 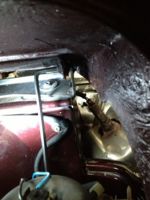 6. A 10mm Socket with extension bar can now be used to remove the main pivot bolt. 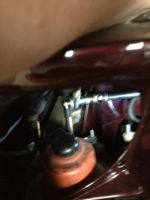 7. The headlamp pod can now be lifted away to reveal the pod bracket and relay lever.

10. The Relay lever can now be removed for further inspection.

11. Inspecting the lever revealed that the ball joints were fine but the pop rivets holding them on had worked loose.

12. The rivets were drilled out, ground off and replaced.

13. I now turned my attention to the balljoints inside the pod itself. The pop rivets were also loose but rather than remove them I decided to tighten them using a small G clamp.

14. This made them slop free once more.

The headlamp pod was reassembled and is now slop free. The only flexing in the system is now the glass fibre pod itself.