I was reading the above thread through and thought it didn't really answer the question, so I thought I do a bit of research. 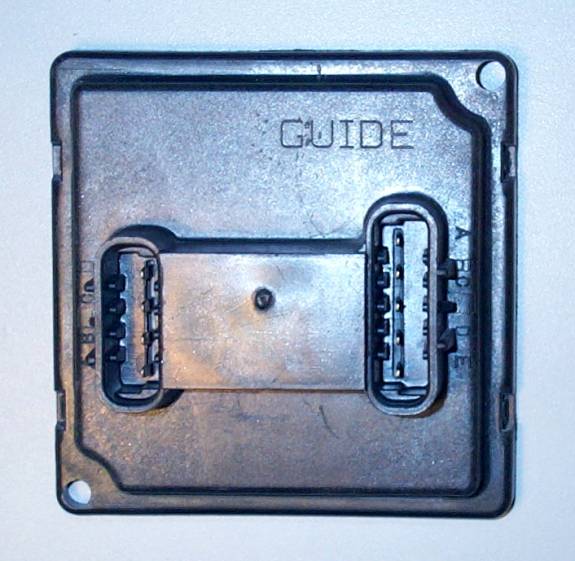 Here are the extracts, just incase the boards disappear for ever

Oct 16, 1999 - 18:20 - From: Dan Title: Headlamp Pod Control Module Message: I've done some research and talked to a few GM Parts guys who helped cross-reference the now-defunct part #16509097(from sticker on my bad control module); one guy told me all Firebirds and Fiero's use the same module; another x-ref'd the number to the current active part#16525685 and concurred that they all used the same thing. Lotus wanted $186 for this module, Pontiac $140-173 depending on part. I went to the local junkyard...oops I mean "auto recycler"...and paid $10 for one from a '94 Firebird that lost a one-punch battle with a phone pole. It had part #16521278 on the outside sticker. as the outside case was pretty crappy, I popped it open and re-used my Lotus case; the circuit board was quite different(less components, only 1 IC chip and what appeared to be the same relay). I also got the e-mail address thru my Lotus Ltd contacts of an engineer at GM Detroit who worked on the M100 project....I will contact him and ask that he check out this site and contribute any insights he may have. By the way....problem solved! the Pontiac part works just fine...if I have any subsequent problems related to this I will post them here. How about that "Parts Cross-Reference " page Doug? Please feel free to add this info

Oct 18, 1999 - 13:23 - From: charlie Title: on a roll. headlamp pod. Message: the headlamp pod just seems to be a delay module to stop the user oscillating the headlamp motors too much, I know there was a design change that stopped some sort of dazzle when the lamps were popping up in earlier models that's possibly why the circuit is different. the relays control the lift motors it seems. I doubt they contain any esoteric parts. Like I said before I'd really like to take apart the busted one you have Dan. email me about it if you've still got it and don't mind giving it up.

Oct 18, 1999 - 15:30 - From: Dan Title: Headlamp control module Message: Charlie -- shoot me you address in an e-mail to "L23S10@AOL.COM" and I'll send you the busted part(if I can get it away from my 6 yr-old's Star Wars play area -- he thinks it's cool! Maybe he's got a future....I've had 2 people tell me he's a dead ringer for Anniken -- M100 Pod Racer?) Lotus part has a bunch more resistors/capacitors and 2 IC chips on it...the '94 Pontiac part was considerably simpler. I believe the circuits are designed to swap hot & ground to the headlamp motors and sense when they've reached full throw, then shut off. I'm not sure how much repair effort is warranted if you can grab one from the bone yard for $10, but I'd be interested in your findings. Dan [/quote]

If thats the case I think these are the same as ours Top Downsolutions and at sub £40.00 not too bad but not sure about shipping to the UK. or it could be dirty contacts.

So by piecing all the bitz together

I guess this is first choice...

And this could be another...

Headlight Control Module: The headlight control module is the same one in the Pontiac Firebird/Trans Am. It was rumored that this module was also in the Fiero/Sunbird. The module looks exactly the same in the Fiero/Sunbird. Upon opening up examples from both the Fiero/Sunbird, the pin-out is the same but the electronic connections are incompatible. It was not until I had my hands on a '92 Firebird module that the headlights worked. Dan had also used one from a '93 Firebird. Also, in investigating this problem, I visited the Firebird usenet groups. This module is prone to burn-out. (replacement cost new - $200) So, while Dan and I are the first, I do not believe we will be the only ones. Be warned!! The module is 5"x5", black and has one 4 wire plug on the left and a 5 wire plug on the right. Also, the module has the word "GUIDE" written on its top. On the Elan, while looking at the engine bay, the module sits on the left hand side of the firewall. On the Firebird, the module sits either next to the master cylinder or near the left headlight. --Scott

On the '93 Trans Am Firebird I grabbed mine from, the module was below and behind the LH Headlight pod -- you have to look close to spot it. --Dan

So Hopefully everything has been pieced together.