This section relates to the turbo ignition system: It is a Direct Ignition system which does away with conventional distributor. It uses two separate coil packs and the 'waste spark' technique whereby cylinders 1&4 and 2&3 are provided with a spark every revolution i.e. on both the compression and exhaust strokes, the latter obviously serving no useful function. The two coil packs are mounted on a backing plate. The coils internal ignition module controls the spark advance at cranking speed but when the engine speed exceeds 800RPM, the Electronic Control Module (ECM) takes over control.

Its worth mentioning that this would be a prefect time to replace your ignition leads too!

First of all we need to move the tank in the top right of the engine bay out of the way. Its just held in place with one bolt on the top. Also remove the big rubber intake pipe. 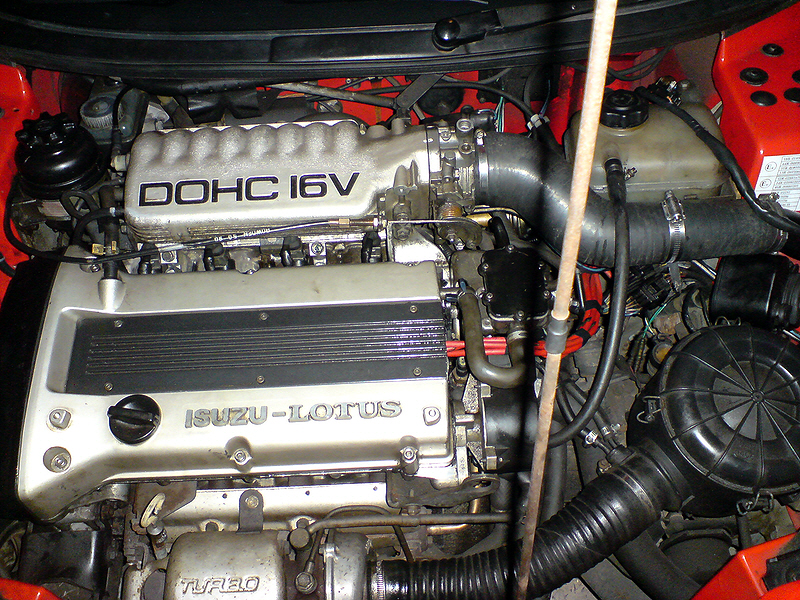 I used a cable tie and secured the tank to the bonnet stand so that it didn't get in the way.

Now the coil is visible. Remove the ignition leads. 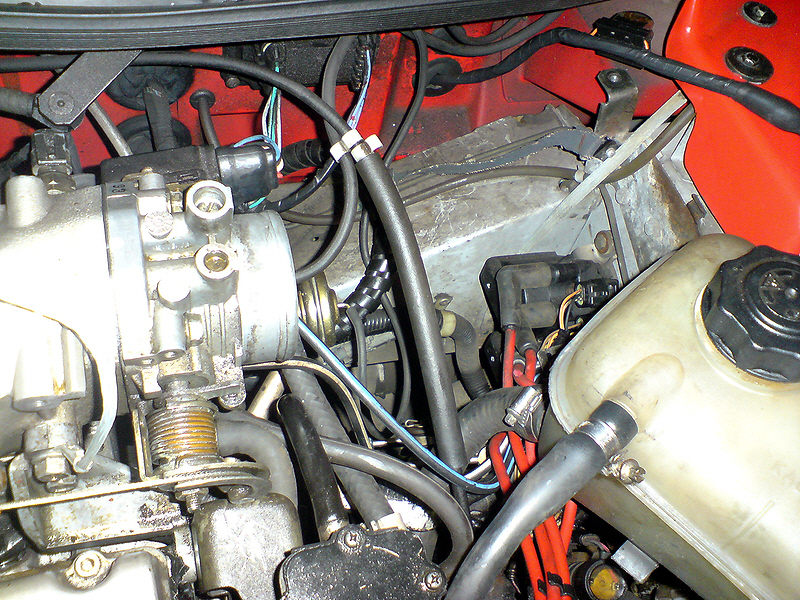 Remove the three plugs from the top of the unit. You don't have to keep note of which one goes where because they will only fit in a certain way. Also notice the earth strap on the left hand bolt. This will need to be put back on later. Hello rusted first coil

Unscrew the three bolts holding the coil plate onto the engine bay. Its a good idea to do the bottom two first.

If you accidentally drop a bolt there is plenty of space for it to fall out onto the ground below the car. Try not to let this happen though. 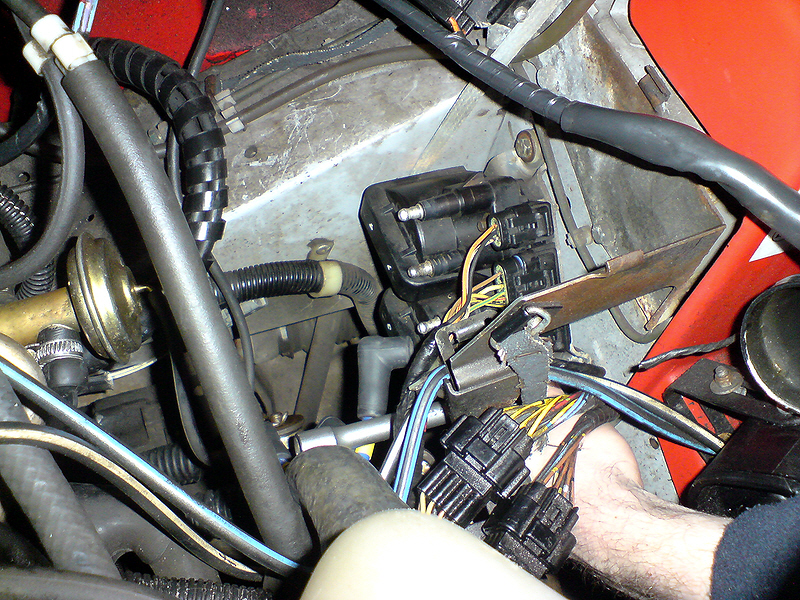 A nice shiny new coil ready to be put in . 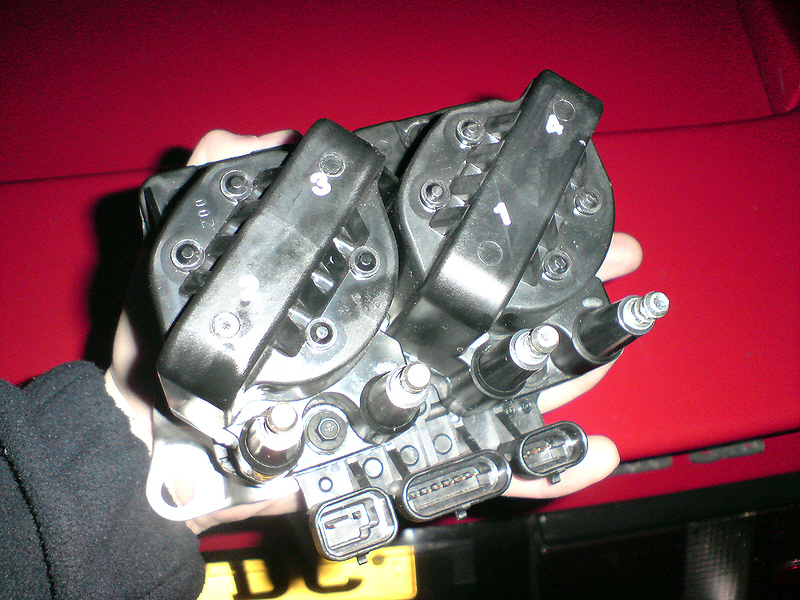 I superglued the washers in the rear of the new plate to make the refitting process easier. 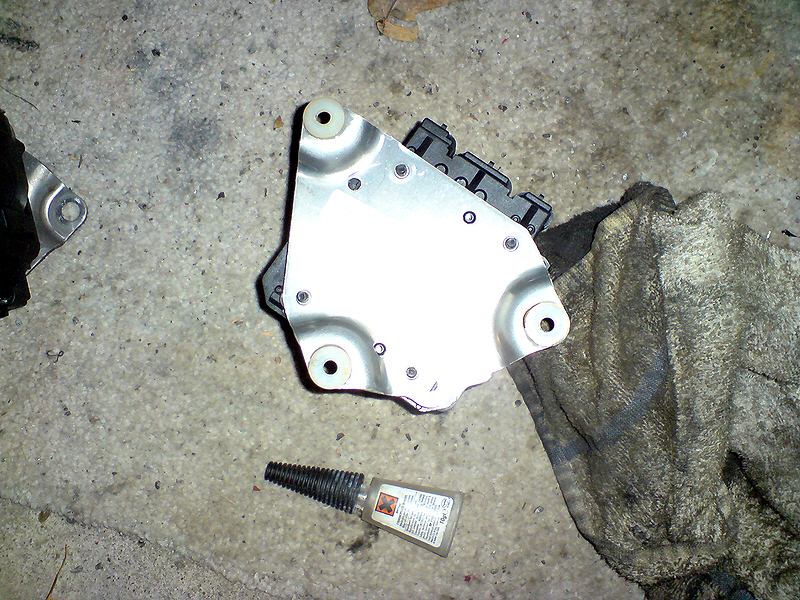 Fit the new coil in the same way you removed the old one. Remember to refit the earth strap too. Reconnect the ignition leads. Now is a good time to try starting the engine to make sure its all working correctly.

If everything is good then put the tank and rubber pipe back in place.

Description as above but:

It's possible, and very easy, to replace the coil packs without taking the whole coil assembly out, as described above. The two coil packs are held to the bracket via two 7/32 inch bolts each (visible in the above pictures. One is between the ignition lead connectors. The other is on the opposite side of the pack). The black plastic base of the assembly, that contains the wiring, is held on by those same bolts, by compression. There's apparently a grommet or insulator in the holes in the plastic base, because the bolts don't fall out when you loosen them, which is nice. Leave the three wiring harness connectors connected, and the wiring base will pretty much stay where it is when you remove the coil packs. There are a couple of built-in studs on the base that go into holes in the bracket to line it up so it all goes back together easily.

I used a short ratchet handle, with a 4 inch extension to easily reach the bolts and have room to turn the handle.

When replacing the coil packs, I'm betting it's easier to handle them individually, than it is to remove the whole assembly. The entire job (plugs, leads, and coil packs) took only about 30 minutes.