2. Jack up car, remove front wheel, place another jack at the inner jacking point at the rear of the prongeron and raise the car.

3. Now put car on axle stands at normal front jacking points. I have also placed a block of wood under the sills just in case!

4. Now open the bonnet and remove the air filter and associated pipe work

5. Remove the clutch cable from the clutch lever. At this point it is also worth removing the bolt that holds on the expansion bottle.

6.Remove the clutch cable from the guide bracket.

7. Remove the spring clip from the smaller of the two gear selector cables and pop off the cable.

8. Remove the spring clip from the larger gear selector cable.

9. Pop off the larger gear selector cable from its pin.

10. Remove the speedo cable by removing the 10mm nut and clamp plate.

11. Remove the three bolts that hold on the gear selector cable mounting bracket. This avoids accidently adjusting the cable lengths.

12. Disconnect the wiring from the reversing light switch.

Its now time to work under the car.

13. Drain the gearbox oil by removing the drain plug. 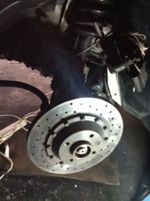 14. Unbolt the top wishbone ball joint. Take note of how many shims are placed in front of and behind the balljoint. there should be 8 shims in total for each ball joint. In my car there are also inserts to set the camber. Remove the brake caliper and tie it up out of the way.

The drive shaft nuts can now be removed.

The nearside drive shaft should be pushed through the hub and then popped or levered out of the gearbox. This can be a fiddle as it is held in place by a snap ring. Do not pull the driveshaft out as this might damage the inner plunge joint.

The off side drive shaft should be removed by removing the jackshaft bracket bolts then pushing the driveshaft through the hub. The offside driveshaft has no circlip at the gearbox and will slip out easily.

The drive shafts can be left supported by the suspension yolks but make sure they are not in the way of the gearbox. 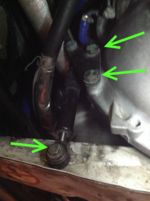 At this point support the gearbox and engine from above or below using a trolley jack.

I used a bracket to support the engine from above and I placed a trolley jack under the sump. I also put a strap around the gearbox and over the support frame up above.

15. Remove the progeron and the front damper along with two of the bellhousing bolts. Start at the front of the car and work your way back. 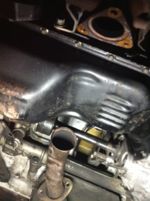 18. Its time to remove the rear engine mount bracket.

19. Now remove the gearbox mount. This has several parts, a damper and a couple of L shaped spacer plates. 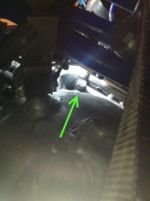 20. the only thing holding the gearbox on now is three bell housing bolts at the top. These are a bit awkward to get to.

21. The gearbox can now be pulled free from the engine and lowered to the floor.

A few things worth considering before putting it all back together.

It is worth trial fitting the mounts onto the gearbox as you will find you have an awful lot of bits lying around.

Start with the gearbox mount

Then the rear engine mount

Aligning the box is quite tricky but perseverence will pay off.

I hope this post will help anyone considering removing their gearbox or changing a clutch on their Elan.