Lotus part number A100E6373S is the Coolant Temperature Sensor (CTS) which reports the engine coolant temperature to the ECM. It consists of a thermistor in a sealed package which screws into the thermostat housing.

Thermistors are negative temperature coefficient devices and from the Lotus parts manual EMK.4, the Elan has the following characteristics:

Having discussed this with some Esprit owners, and with reference to their parts manual EMH.4, it turns out they have the same CTS thermistor characteristics {as well as the same ECM}. Their part number is A910E6928F and is available from SJ sportscars for ~12GBP whereas ours is closer to 50GBP! This has been test fitted to an Elan with a positive result.

ESM did some research and found data for the Pontiac Fiero has the same CTS thermistor characteristics. Cross referencing with a US parts site Parts America gives several options for the 1988 Fiero CTS. This site is useful in that you can view a part and then see which vehicles it fits. The Fiero CTS is common with the Isuzu Impulse RS and Geo Storm (as suspected but I don't think it has been proven until now) and more importantly for UK owners, a car available in the UK - the Isuzu Trooper (1986-7 with 2.3l engine and 1992-2001 with 3.2l & 3.5l V6 engines) as originally suggested by ESM.

They have been sourced from Vauxhall for ~15GBP with the ACDelco part number 25036979.

A quick guide to removal and refitting:

1) Mark position of CAS with felt-tip pen on cam cover.

2) Remove CAS by undoing the socket-head bolt and all electrical plugs (there is one underneath). Expect some oil seepage so have a clean rag ready.

3) Unplug 2 way connector from CTS. NB the temp gauge sender is the one right next to the engine block at the front and the fan switch is the one furthest away on the thermostat housing with a white plug.

5) Watch about 2 litres of coolant widdle out over the floor.

6) Screw in new CTS. ***DO NOT OVERTIGHTEN AS IT HAS A TAPER THREAD AND CAN CRACK THE HOUSING***

10) Check you haven't left any tools around the place, then test. It would be worthwhile having Elanscan running at this stage to verify you have a good CTS reading.

If you are a real die-hard perfectionist, you should now check the engine base timing as you will have disturbed it. It isn't a bad thing to do regularly anyway. 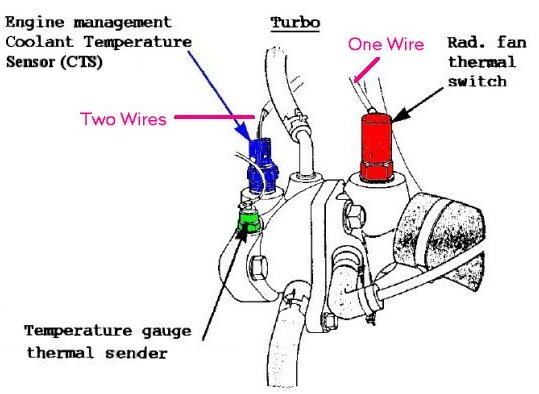