If the sliders are worn at all, or any of the dust covers are missing, you are probably better off going down to HalFrauds and getting their Vauxhall kit. It costs about a tenner each side, but includes the sliders, seals and dust covers for the allen head bolts.

How to re-grease sliding pins

The sliders are dead easy: push firmly on end of the first slider, it will pop past the dust seals. If the seal needs a helping hand, just lift the lip out of the end groves of the slider.

If the slider needs to be hammered or drifted out it's corroded. Support the caliper and knock 'em out anyway. Admire the oxidisation process and send the whole unit for reconditioning. New units come with sliders.

Using your hands/fingers, smear Silicon(e) Grease (White stuff) over the sliders and lube the bores, push the slider back through the first seal into the calipers and helping past the other seal. Using your thumb and forefinger the sliders should shuttle, a little stiffly at first, but then slide smoothly back and forth under a constant alternating pressure. Any excess grease will squidge out.

Don't be tempted to use graphite greases or a variant of copper eaze: these are very abrasive greases and will do harm to your sliders and the bores in which they sit. Silicon products won't perish the seals like other greases.

Repeat for the other sliders..

This is where things get a little complicated. These units are not Lotus per say, but have a complicated history behind them. The long story short; seizing was common on our style of calipers; this was due to the metallurgic qualities between the sliders and calipers. In the USA a recall notice was issued and a potential law suit ensued, overall the problem was resolved and the design changed. The scary part, Lotus never issued the recall notice in the UK.

Replacement sliders are available from SJ Lotus, they also recondition the rear units.

The lotus part number for the rear kit is A100J6066S, but costs (and with delivery on top, it gets even worse). 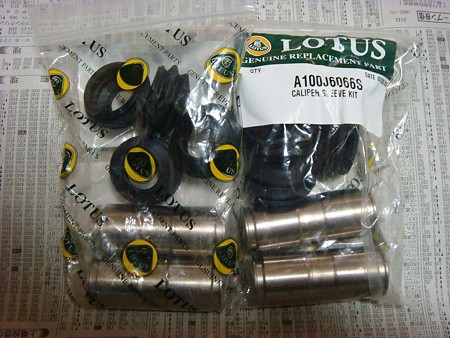 Similar, but not identical variants of caliper are available from USA. Rear Sliders for pre-mod brake calipers, basically the UK varient.

Alternatively, one could order a pair of DORMAN rear calipers (ie, part# CA10113L and CA10114R). These DORMAN calipers have all the parts less the tools to overhaul one's current OEM Lotus rear calipers.