The Elan's ECU can be accessed via the ALDL port for real-time engine monitoring. A suitable electronic interface is required.

This interface has been designed to provide a robust Bluetooth (wireless) connection. The interface can be used for connecting to the Windows based ElanScan and Android based ElandroidScan software. 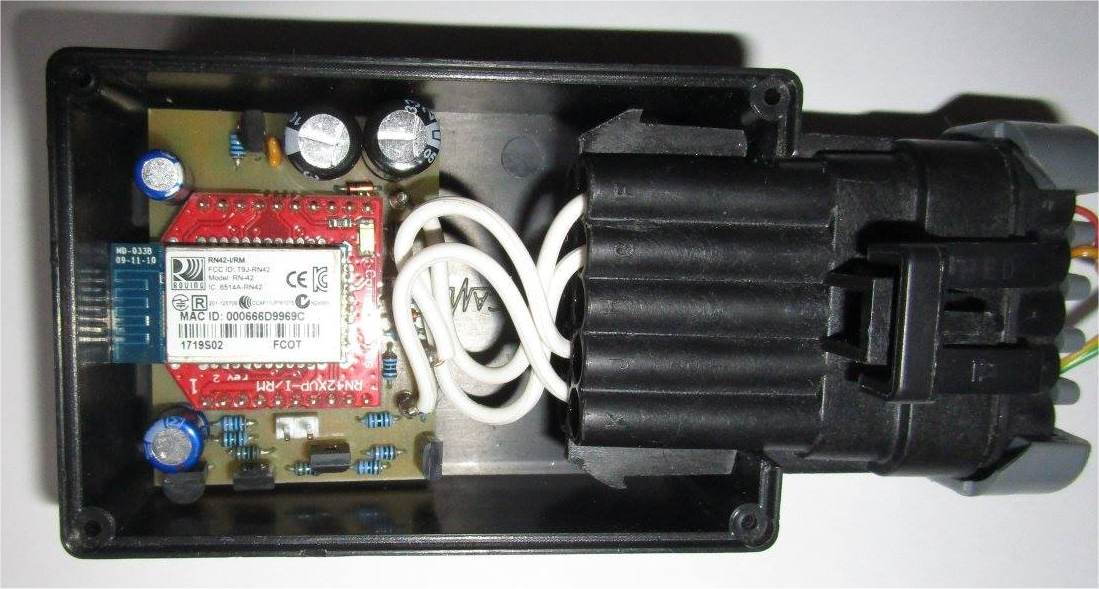 The Bluetooth interface is designed around the commonly available Microchip Roving Networks RN41/42 chipset. The RN41/42 must be pre-programmed with custom setting for e.g. the none standard baud rate of 8192. Communication with the ALDL interface is via the transmit and receive ports. The RN41/42 are pin for pin plug-in compatible devices however the RN41 has a 100m range as opposed to 20m with the RN42.

To avoid the risk of battery drain when the car is not in use, the ALDL line is monitored by the sub-regulated power supply circuit and the Bluetooth interface is only powered up when the car's ECU is active, otherwise the current drain is negligible (microamps).

The Bluetooth interface has been manufactured with a custom designed single-sided printed circuit board (pcb) and this, together with the ALDL plug, is housed in a plastic case. The interface can be discretely plugged into the car's ALDL port and left in-situ if required.

To aid development and to perform a functional check on the above interfaces without having to connect to a car, an ECU emulator was built. It is USB based utilising an FTDI USB to serial converter, contains a switched +5V to +12V DC to DC converter and is terminated in a female 10 pin socket to provide full compatibility.

A LabVIEW program has been developed which allows control of the +12V line, monitoring of the Service Mode line and communication on the ALDL line at a baud rate of 8192. On startup, the program allows a previously saved ElanScan (.ecu) file to be loaded. The program listens to the ALDL line and when an F45601B5 sequence is detected, it replies with the next 70 bytes of the ElanScan file, thereby providing a real time simulation of the operation of an ECU. LabVIEW allows a Windows executable to be generated for distribution (with the LabVIEW runtime engine) to other developers. Various modifications have been added to allow debugging: For example, the return of fixed bytes in the ALDL data stream or individual control of selected bytes.