For information about the different Elan M100's that Lotus produced, see M100 Editions.

Maisto manufactured a 1/36 scale die-cast model for both the Elan SE and S2.

These models were available in several guises, the most common was the Shell Petrol Stations promotion. This was a scheme of collecting points and redeeming them against a model car. In the UK the car was normally blue and packaged in a yellow marked Shell box.

There was a final quirk, Cars given to Lotus employees in shell boxes...

IIRC the following colours were avilable from Lotus until 1994:-

The precision model cars listed in the catalogue from SMTSare manufactured from white meal with resin, photo-etched and plated parts to form 1:43 scale collectors cars. All are individually hand built and finished in authentic colours and decals. Models are also available in kit form, ready to paint and assemble. 1:24 scale models are listed separately.

A rare item indeed. This a direct copy by Hasbro of a 1989 to 1994 Lotus Elan SE M100, which was the car driven by James Bond Jr. in a short lived comic book series and TV show. It is over 11 inches long, six inches wide and 3 inches tall. Just like the James Bond Aston Martin, this little red Lotus has plenty of toys that blend into the car without overtaking the obvious Elan lines. The features include pop-out front guns and a saw blade battering ram, pull out hub cap shredder blades, a spring action ejector seat (the seats match the real car styling), a rear spoiler that flips up to become a bullet proof shield, and the dual exhaust pipes convert to spring fired missles. 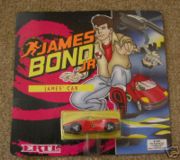 Another rare item. This a direct copy by Kenner a trademark of Tonka Corporation, a subsidiary of Hasbro of a 1989 to 1994 Lotus Elan SE M100 which was the car driven by Jim Carrey's character from the movie The Mask. The toy is very large, I guessed at the 1/15 scale. It is over 12 inches long, six inches wide and 3 inches tall. The car is yellow and the decals are optional. The features include pop-up front jaws, pull out hub cap shredder blades, a spring action ejector seat (the seats match the real car styling), and the dual exhaust pipes convert to spring fired missles.

This model is still in the early planning stages.

The Kia Elan as seen on Ebay

Bored? Need an Elan fix? You could spent few hours playing with repainting, waxing, detailing, etc. The one I have comes from Shell Sportscar Collection series.